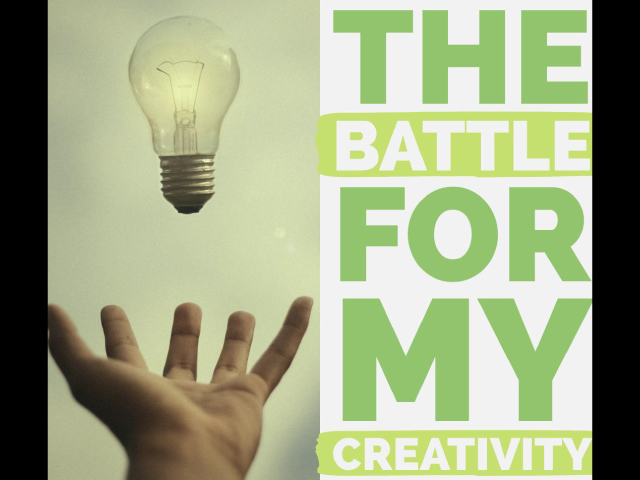 The Battle for My Creativity

There is another battle taking place in the 21st century.

It’s not a nuclear war. It’s not about a virus. Or people. Or extra-planetary beings.

It’s a battle for my creativity.

When I(and even you) was born, we were given a high dosage of creativity from God. As you know, God is really creative.

Look in the mirror. Marvel at how God could have made 7 billion(and counting) unique eyes and fingerprints for everyone. God is creative.

Well, that’s a story for another day.

Somehow after we were all born, the creativity started to leak.

Depending on how old you are, the leak gets bigger and broader.(Though that is not true for everyone! I know some really creative senior leaders)

On the surface it seems simple and uncomplicated. But everyday my creativity is under threat.

The attack happens in the strangest of ways.

For example, I am in a room surrounded by people. Instead of listening to someone share their idea and learning something new, it seems I have to blurt out something and prove my point. I proved my point but I lost that moment when I could have discovered something new.

The reverse is also true. In the same room, I am given an opportunity to speak up and make a difference. But, it seems my fear of making a fool of myself, though I probably had the idea of the century, paralyses me from candidly sharing my heart. I did not make a fool of myself, but I lost that moment when I could have grown in my creativity.

The battle for my creativity rages in the awkward of places.

I am sitting down with a coffee in hand, and nothing else to do. Somehow, my jealous mind cannot tolerate this moment of solitude and possibility of watching my creative juices flow. My fingers immediately twitches for my cellphone. I switch on my internet and countless notifications pop in. I lost my moment of solitude and I lost the moment of creativity.

I am standing in a long line with nothing else to do. Somehow, my active mind cannot allow me to do nothing and enjoy the possibility of developing new ideas. I take out my phone and scroll down my social media feed. I lost my moment of ‘doing nothing’ and I lost the moment of creativity.

There is a battle for my creativity every second. How do I win this battle? There are several things to consider here.

Firstly, never forget the power of ‘doing nothing’. We have reached a stage where we feel that if we are doing nothing we are lazy and unproductive and unprofessional. But it’s those moments of doing nothing: when you are standing in line, or sipping coffee or waiting for somebody or taking a stroll that you have the greatest moments of creativity. Ideas flow in. Plans pop out. There is an ‘eureka’ moment. Crazy awesome things happen when we are doing nothing. Often it happens that I am looking for a pen and paper to scribble down those awesome ideas. Sometimes it is a tissue paper. Often it is the palm of your hand. But we mostly lose the battle. Because we have forgotten the grand privilege of ‘doing nothing’ and developing something great.

They say, based on a survey conducted by creativity expert Scott Kaufman, examining people from eight countries that he found that 72 percent reported having a creative breakthroughs in the shower!

Don’t replace the moments of seeming inaction with distracting activities like flipping TV channels, or scanning YouTube videos or scrolling down your social media feed. Those very moments could kickstart some of your grandest ideas.

Especially if you are a person who believes that unless you speak you will be considered a fool. Shut up and you might learn a lot. Actually, you are not the only person who has creative ideas. Listen and learn.

Thirdly, don’t be afraid to speak out. It’s a big risk to open your mouth. You can potentially make a fool of yourself. But I am discovering that when I speak up when given an opportunity to speak, I can add value to people around me. An idea can change someone else’s life. My silence might keep me out of trouble but it doesn’t alleviate someone else’s pain. Sometimes when I open my mouth I suggest some of the dumbest ideas. But those moments of ‘dumbness’ springboards a creative idea for somebody else in the group.

Fourthly, don’t be afraid to make a fool of yourself. This is quite a sensitive issue. Because we would rather be playing it safe and letting go of any scenarios or occasions that could potentially make a fool out of us. But some of the foolish guys became great inventors because they had no qualms about making a fool of themselves.

Fifthly, never forget who you are. You are unique. You are special. You are God’s creation. Everyday is an opportunity to make a difference in your world. Nobody can do things like you do.

The next moment is waiting for you.

Don’t lose the battle for your creativity.